“Relax”, said the Russian man to the Chilean girl. But the Chilean was shivering. She was blindfolded, she was grabbed by two. The Chilean girl got carried away. The Russian guy threw five knives that burst five balloons strategically placed in her body: one in her mouth, one under each arm, one between her knees and one in each hand. The Chilean girl removed the blindfold and she burst out laughing. This was her first experience in Couchsurfing.

My couch is your couch

The idea of sleeping in stranger’s houses was born after Casey Fenton —american, hippie, entrepreneur— travelled to Iceland, where, after sending hundreds of emails, found several students willing to host him for free. Back in California, he began to develop the idea behind Couchsurfing (CS). It was 2004 and, like all good ideas, it was expanded to become an organised couch exchange platform. Currently the website counts with 7 million members from a hundred thousand cities: from Santiago to Alaska, from Ho Chi Minh to Timbuktu, from Vatican City to New Delhi. About 38 thousand are from Chile. I’m chilean, I have to point this out! 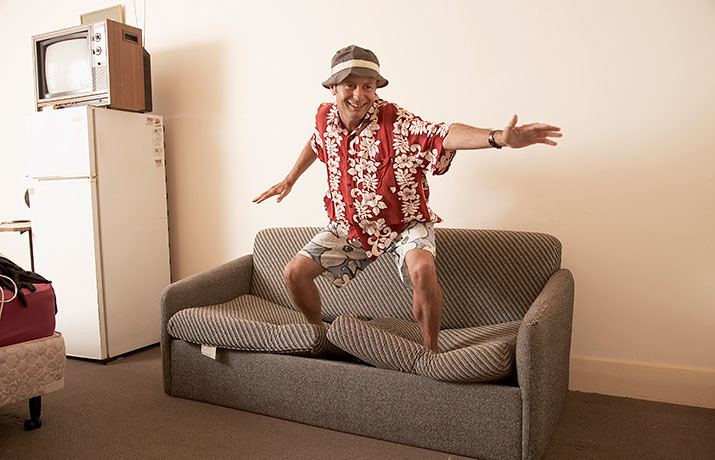 Couchsurfing is, in fact, any available space that can be offer to a traveller to stay: an expandible sofa in the living room, an inflatable mattress in the kitchen, a private room, a garden to set up a tent.

However, to describe CS as free accommodation would be the equivalent to say that the iPhone is to make phone calls. It’s the most popular travel network in the world, a form of cultural exchange between host and surfer where, as the site says, you get together with a friend that you haven’t meet yet.

Alahe Abrahimia (24) could easily be mistaken as Chilean. “My parents are from Iran”, she says. Born in California and raised in Luxemburg, Alahe’s destiny was to become a citizen of the world. Her big, white smile invites anyone to hear her experience, as if she had awakened that morning in a strange couch.

“First, I look for hosts with photo, with at least two references. It is very important that they have a good description, I don’t want to stay with somebody that just wrote a couple of lines and have nothing interesting to say”, she adds.

In the profile is vital to outline philosophy and life mission. The more information provided, more chances to be hosted. You also must specify what is offered: a couch to sleep or perhaps a couple of hours to show the city to a traveller. After hosting or surfing it is important to qualify each other and leave a comment about the experience.

The —domesticated— tourist walks around a city with a guidebook under his arm, leaving short space to spontaneity. The —wild— traveller wants to be amazed, is looking for the unexpected and prefers to see a place from inside, in order to have a view from a local perspective. That’s why Alahe uses Couchsurfing every time she visits a country.

“Saving money is always a good thing”, says Alahe, “but is not my main motivation. However, it’s not free if you consider how much time and energy you spend looking for a host”, she concludes.

Indeed, looking for the right host requires work. After you choose one, you must write a couchrequest, a formal petition explaining why you want to surf that particular couch. Therein lies the secret for success.

The romance between Couchsurfing and Francisco Carmona (31) —Chilean, temporary resident in Denmark— began in 2006. Like all great love stories, this one began by chance: “I was on the subway on my way to University, and saw that someone was reading a newspaper that said The new way to travel. That week I started looking for more information and I signed in the website”, he says.

He got involved to the point that today he has already hosted more than a hundred people —both in Santiago and Copenhague— and became a national ambassador for the platform. “I want to show what we can do as a travel community, not just touristing or going around, but also by social contributions. So I started organising different activities like going to a typical Chilean bar called La Piojera, making hospital visits. I try to show not only the touristic Chile, but also the human side of the country”, he added.

In addition, Couchsurfing is a good resource to join other solo travellers or to start a network of acquaintances after you migrate to another city.

On a trip to New York, the girl of the throwing knives, injected with the poison of curiosity, attended a Couchsurfing party. It would be done in a duplex located in the Upper East Side, one of the most affluent parts of the city. “This is too good to be true”, she thought. But reality was better than her expectations. Upon entering, she found people who immediately made her feel welcome. On the terrace, some couchsurfers were playing music. In the kitchen, some Puerto Ricans, hired for the occasion, were preparing tacos and indian food for the three hundred guests. In one corner, the place’s owner —painter, millionaire, eccentric— was talking quietly, as if those three hundred strangers were friends of a lifetime.

“I’m attracted to the unexpected, especially if I am travelling alone”, says Alahe. “I prefer to stay with young people, but one of my best experiences was with someone older”. It was her first time travelling on her own: Portugal was the chosen destination. “A guy offered me his couch. I saw his profile and, instead of a picture, he had a cartoon. Weird. Then, I noticed he was about 75 years old but I checked his references: he had a lot, all of them positive. So I thought it should be something good”, she recounts.

“When he opened the door”, she continues, “I could see his eyes shining. You could feel the hospitality! He gave me a set of keys right the way —it was the first time that someone gave me keys—. He lived by himself, was retired and every single day he did the same, he went out and show his city to these strangers staying at his place. His home was small, an apartment with two rooms. At the entrance he had this massive globe with flags from all over the world. He also had a shelf full of gifts given by his surfers. It was pretty impressive”, she adds.

The parental advice to ignore strangers does not count on Couchsurfing. Although one should always use common sense when traveling in any foreign country and staying with someone you don’t know.

In 2009, the case of a couchsurfer raped in England by a Moroccan resident was published. He was sentenced to ten years in prison.

Regarding the cases of sexual harassment or abuse, Carmona says he’s never had a problem and believes Couchsurfing does take responsibility. “A surfer told me that when she went to Bucharest she receive a message from CS warning her about a former member which had been reported several times,” he says.

Francisco still believes in the project. On his return to Chile he wants to continue with the organisation of activities with a social focus.

Travel like a local, stay in someone’s home and experience the world in a way money can’t buy, says the “about” section of Couchsurfing.

At the end of the day, the best things in life are free, but not because we save money, but for providing us experiences that would otherwise be very difficult to have. If not, how would it be possible to go to an exclusive party in New York or be part of the act of a Russian knife thrower in a new zealander circus without spending a dime?

*This story was originally written by Fran Opazo for UFT and published on its website (2014).

10+ WAYS TO GET REALLY CHEAP OR FREE ACCOMMODATION 10+ ways to get really cheap or free accommodation