What do travel and cats have in common? That I’m obsessed with both. I love cats since a very young age and I grew up surrounded by Hello Kitty’s toys and accessories. I never had a cat as a pet because my mother hates them, she has some kind of phobia. Once I had a kitten living at my ex-boyfriend’s place. I was so happy. But this cute little kitty made this guy jealous.

“You just come to see the cat, don’t you?”, he asked. I kept quiet. But I guess is true that silence gives consent. The cat was so stressed because of this guy and I had to give her away. She was in good hands, she was taken care of, she was loved… until she jump off the window. 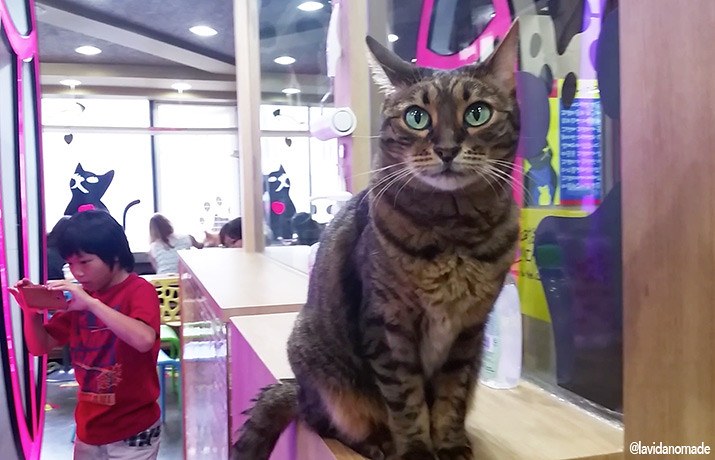 The most social cat in the Korean cat cafe.

I love cats because they are smart, independent, soft, they have incredibly colourful eyes and they move very gracefully. I believe cat haters are just jealous of their majestic beauty and they can’t stand them sitting in a comfy place while they observe people.

Sometimes I satisfy my cat needs watching youtube videos or staring at the pictures of cat food cans at the supermarket. Pathetic, but this is true love. I’m like the crazy cat lady, but without cats and younger.

Apparently, the idea of opening a place where people could have a coffee while cats walk randomly started in Taiwan, at the end of the 90s. Maybe they succeed in Japan and South Korea because the houses are very small or maybe because people work very long hours and they don’t have spare time to share with their pets and enjoy them.

On my visit to Seoul I couldn’t resist to go to a cat cafe. One afternoon, I was wandering around Myeong-dong when I saw a guy dressed as a tabby cat. I hugged him and asked him the way to happiness. So I went to a second floor in a building where I had to take off my shoes and wear some plastic flip flops. The place looked good and clean. There was no urine smell. 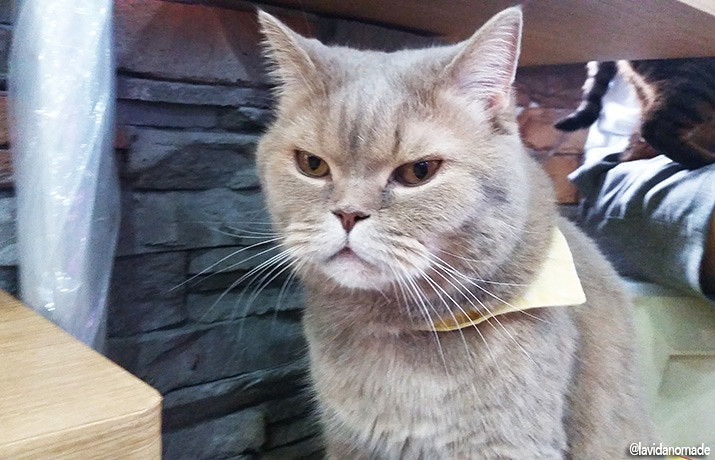 The entrance fee was 8,000 won (about 7 USD) and it included a drink. So I ordered a green tea with milk and sat down to enjoy the feline pleasures that this place offered. There was a sign with the house rules. And another one, saying that the cats with the yellow handkerchief were “delicate” or something like that. Unfortunately, most of the cats had this handkerchief on or were sleeping.

The truth is that both the “delicate” and the “normal” cats were not interested in us, humans. Every time me or my friend tried to touch one them, they turned the opposite way. They didn’t interact with other cats either. There was a group of girls sitting on the floor hoarding the few social cats. Then I realised they were attracting them with treats. One of the cafe employers was going around giving tiny amounts of food to people, so the animals could do their jobs properly. In other cat cafe you have to buy the treats. 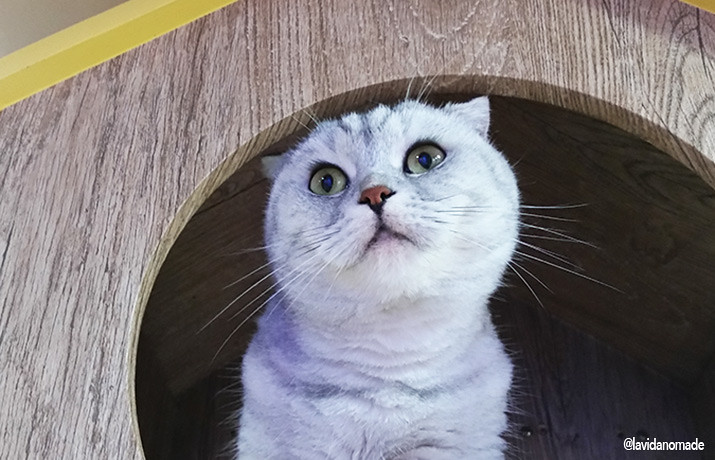 “I want to be free” — a very sad Cat Cafe employee.

To be honest, the cats didn’t seem to be acting normal, they seemed stressed and impatient. I’m not an animal behaviourist, but cats are territorial and the fact that they have to share a 10 x 10 meters room was totally affecting them in a negative way. We stayed for one hour, but I was hoping to stay two, in order to replace what destiny denied me. After Seoul, I went to Tokyo —cat lovers paradise— I didn’t visit another cat cafe because I had a few days and a lot to do. So I guess I’ll stick to the nice friendly stray cats at home. They always meow at me. And you know what, they told me they are enjoying their freedom. In this post, I will tell in detail everything about safety in San Pedro de Atacama and how I got robbed. Also, this was my first (and disastrous) experience with Worldpackers. Everything happened between December Read more… I thought for several weeks —or months I should say— about writing this article. But I didn’t want to be harsh. I am not an expert in travel blogs and I don’t pretend to be Read more… When you are planning a long trip overseas under a Working Holiday visa, a lot of questions might arise and maybe the most important one is which job are you going to do. You’ve heard a lot Read more…